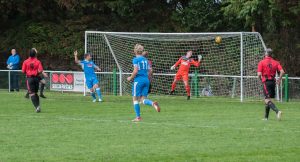 The Larks’ first win of the season was at home to Southern League debutants and FA Vase holders Thatcham Town. This was a hard-fought victory against opponents who at times played the better football but who lacked finishing ability in front of goal.

Our first, well-worked goal came within 15 minutes or so of the start. Some good possession from midfield allowed George King to pass to Mason Winter, whose pinpoint cross was headed home at close range by striker Lewis Powell.

Lewis was to score again to seal the win as well as the award of man of the match shortly after half-time, when Mason once again placed a fine cross into the box which our number 10 buried with ease. Chances also fell to Matt Groves on his welcome return to Plain Ham from Bristol Manor Farm, and to winger Alex Lambert, whose ferocious strike was tipped over for a corner. The Kingfishers did threaten at times and Shaun Semmens pulled off a couple of good stops.