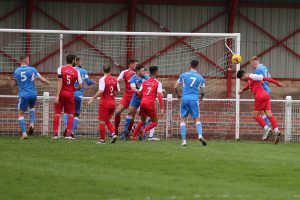 On a less than ideal pitch the Larks made club history with their first ever win in the FA Trophy. Our hosts were not the threat they once were, and had our finishing been more acute, we could have been 3 or 4-0 up at the break, rather than 2-0.

The first goal came within 15 minutes of the start. We won a free kick outside the box, which was executed with his usual aplomb by Dale Evans, and captain Mike Baker rose above the Didcot defenders to head home.

Some 10 minutes later, after the Larks continued to press forward, Wayne was fouled and again our dead ball specialist Dale stepped up. This time it was our other centre-half, Dan Restorick, who met the ball and headed low past Leigh Bedwell from close range (see photo).

The remainder of the first half played out with a number of chances going begging. Alex Lambert, Harry Hope and Cory Simpson all came close but couldn’t quite find the target. The Railwaymen came back out in a more determined spirit in the second period, and man of the match Jaiden Savery read the game very well to make some finely judged interceptions. Didcot got closer to scoring but the introduction of Jack Camm with 20 minutes to go kept their midfield busy and we held our nerve to keep a clean sheet.