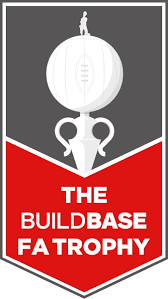 Shaking off the disappointment of a heavy loss in the FA Cup away at Weston super Mare, the Larks treated us to a five goal extravaganza at home to fellow Southern League side Barnstaple Town, our biggest ever win in the FA Trophy.

The first half of the game was all about taking your chances. Captain Mike Baker caught Barum napping with a fierce header from inside the box off a free kick after only two minutes had elapsed.

Rather than building on the early lead, the Larks then sat back somewhat and allowed Barnstaple to push them back into their own half for spells of the first half. But although their forwards Ofori and Bello worked hard for the visitors they couldn’t find a way through, and the first period ended with another Larks goal when Lewis Powell got his lead to a cross. 2-0.

The Larks looked better organised in the second half and Joe Tumelty put the tie beyond Barum with a superb left-footed strike from the edge of the area. Unsurprisingly the visitors’ heads dropped at 3-0 down and only a few moments later we’d increased our lead when Joe was fouled in the area and Lewis stepped up to place the penalty beyond Adam Seedhouse Evans.

With a substantial 4-0 lead the Larks were dominant, playing some excellent passing football. A fine move starting with man of the match Tom Warren, playing at right back, enabled centre-half Jake Thompson to get his first goal for the Larks, a diving header that was only going one way.

The next round will be played on Saturday 31st October.