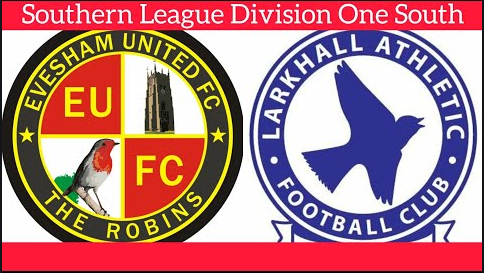 The Larks achieved their first league win of the season away at Evesham United last night.

A depleted squad showed great character to dominate the game pretty much from beginning to end. Shaun Semmens dealt with any efforts on goal with ease. In-form forward Alex Lambert sealed the win in the first half, cutting in from the right and beating the Evesham keeper Lewis Clayton with a fine strike from an acute angle.

We were awarded a penalty midway through the second half when Brad Norris was brought down in the box but Clayton did well to save it. This unsettled the Larks and we started playing rather deep, giving away a few free kicks as a result. The home side gave us a few nervous moments in the last ten minutes of the game as they tried to exploit the situation, but we held firm for all three points.

Man of the match: Alex Lambert

Video highlights of the game can be viewed here (from c.4 mins in); Southern League report here.